The scenario is based directly on Clive Barker's novel “The Hellbound Heart”, and the titular movie “Hellraiser”. No prior knowledge of the original work is necessary; your creative choices are just as valid whether they rise from vague memories of the original, a deft fact-check in the midst of play, or solely your own inspiration. The context of the prior art is intended to inspire, not constrain.

Horror fantasy beyond the lust of flesh. 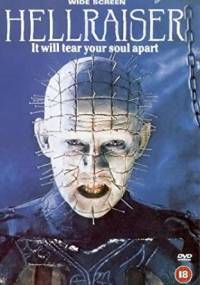 Let me tell you, for this is the true nature of the cosmic weave: numberless emanations of the One, shadows of shadows upon shadows, layered like autumn leaves in thick, undisturbed quilts. Elderly planes of existence, slowly putrefying, achieving the anaerobic stasis of utter stillness.

We are the quick. Our reality is young, young and shallow. Boundaries are thick and hard. Quick, vital, yes, but also shallow, ignorant. Lower realities are old and compressed, still. We term it Hell.

Labyrinth, and in its midst unknown God, Leviathan. In His timeless abstraction, unchanging punishment He rests, the make and measure of Order alone.

Today the privilege of serving His will, the Will of Leviathan, belongs solely to the cenobites of the Order of the Gash; they are humans and devils, explorers of the integral flesh, masters of pain and pleasure. Occult literature terms them Hierophants of the Flesh, for theirs is to bring the supplicant to the understanding of Leviathan.

On Earth only little is known of the unspeakable doctrine of the Order of the Gash, for the cloister of the Order sits in the depths of the Labyrinth, in the place where the shadows meet; only rarely do the Cenobites walk the Earth, only when the call comes for one to join the many. Once mortal, now they are the devils whom others in their folly would summon. Once human, yet the Order of the Gash tries the human flesh, it sets the form of both body and mind. The Cenobite discovers the outer limit of the experience he so thirsts, and breaks through beyond the pleasure and the pain.

Frank Cotton is a lucky layabout, a common hustler with common origins. Frank made his fortune as a young man and has ever since wasted his years on all the pleasures that life has to offer, drinking every draught to its bitter bottoms. Frank is a nihilistic libertine who cares only of his own pleasure, but you should not think of him as sophisticated in any way; sex and fantasies of power over other people are his greatest pleasures. Now age has caught up to the middle-aged man, but Frank is even more concerned by the emptiness of life: he has experienced it all, everything he has the imagination for, and apparently the horizons have nothing further to offer him.

Perhaps a truthful picture of this man emerges from the fact that he himself considers one of his greatest triumphs to be his secret affair with Julia, the wanton wife of his brother Rory. Julia enjoys Frank's savage passion; Frank enjoys the feeling of superiority that his power over his brother's marriage bestows. Even then, the affair has lasted for years on and off, and it has become a humdrum routine for Frank. It was not difficult to let it go when he found something even better.

As his sexual imagination wanes, Frank has procured for himself a strange inspiration, an ornamental paper weight or antique toy called “the Lament Configuration”. The puzzle pieces created by late 18th century master artisan Philip LeMarchand once were in great demand among the idle nobility, yet the Lament Configuration is by no means famous among the LeMarchand boxes: its black, polished, featureless surface makes it near impossible to discern the clever construction of interlocking pieces that might conceivably be tugged apart by a skilled solver.

The significance of the Lament Configuration for Frank Cotton lies in the eldritch story behind the cube's construction: he knows that the duke of L'Isle had the cube crafted in a certain manner, such that deconstructing the Configuration acts as a complex ritual of daemonology, one with the power to open a portal between worlds. Frank's sources describe the LeMarchand cube's destination as a paradise of corporal ecstasy, an experience unlike any other.

Frank has now returned home from his journey of procurement in the foreign parts, ready to focus on the subtle challenge of LeMarchand's. He is preparing an altar, votive gifts for the Order of the Gash, whom he pictures as akin to the porn stars of his dreams. Frank barely understands the powers he plays with, and he has no understanding at all of how very insignificant is the distinction between pleasure and pain for the Cenobites whose cloister bell tolls in answer to the opening of the Lament Configuration. For them all is one in the integration of flesh.

We engaged in some in-depth discussion of the scenario and related issues at Story Games.