The scenario is based directly on Mike Singleton's classic 1984 video game “Lords of Midnight”. No prior knowledge of the original work is necessary; your creative choices are just as valid whether they rise from vague memories of the original, a deft fact-check in the midst of play, or solely your own inspiration. The context of the prior art is intended to inspire, not constrain.

A group desiring the full Midnight experience, so to speak, might wish to read Mike Singleton's original short story "The War of the Solstice" before congregating for the first session of play, as well as print a map of the lands of Midnight for inspiration. The story is slightly longer than what follows, too much so to read aloud on the spot, but it is very concise as well, intended as an introduction to the original video game. It is the perfect grounding for a more elaborately prepared Entropy session, should one desire to try that. 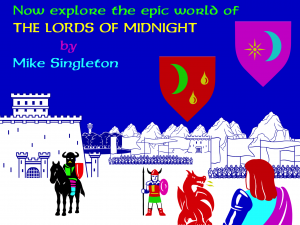 I will put the history in my own words: The lands of Midnight lay in perpetual Winter. Ten thousand moons since the Long Summer, so long that only the Wise in their towers have kept the records. The climate-change brought with it great upheaval as population was thinned and Lords rose to defend their own.

The Wise, who could not predict the Winter, cloistered in their towers through the upheaval, in immortal solitude. Only one in their number chose to remain among the people, Gryfallon the Stargazer; perhaps he knew of what was to come from the stars, or at least knew what to do. Gryfallon instructed his liege lord Ushgarak, who soon became King over the lands of Midnight.

King Ushgarak reigned but twelve moons, and many believe it was Gryfallon who had him slain. It is easy to believe, for soon the ice-fear grew in our hearts as Gryfallon the Wise became Doomdark, Witchking of Midnight. His is the rule and the reign, and has been for numberless generations of man, and shall be as the Winter lasts.

Still, ever as the privations of the people have grown, so do the Lords slip through Doomdark's fingers as so many grains of sand. He is forced to replace them with his inhuman Captains of the Cold. The Free Peoples of Midnight consist of southern lords in the main, those with the strength to break away and resist his will. And the king never ruled the Targ, not even in name only, for they follow only their own Utarg and none other.

Ten thousand moons have passed in perpetual Winter, and now the Solstice is nigh. The Witchking's eldritch power has reached its apex, and his regiments are ready to march upon the Free Peoples for one last time. The Fey are powerless to interfere, the Wise are as ever detached from the affairs of mortal men. The Free surely cannot muster the strength to defend the Plains of Blood once more; the Citadel of Ithrorn shall fall, and so will Xajorkith, the last of the Summer cities.

Arise Midnight! Arise the Free!
Peril and doom lies at our gates.
Waken your valour, arm yourselves with courage!
We ride to conquer Doomdark forever!
Arise Midnight, arise!

Theme: An archetypal high fantasy setup, perhaps not quite as familiar as its inspiration in Tolkien. What will this game do with it?

Luxor The Moonprince, Lord of the Free 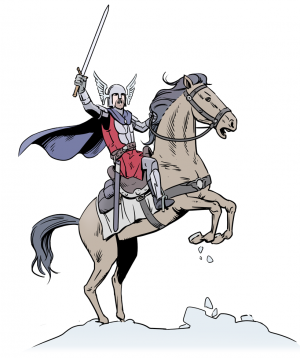 Luxor of the Free Peoples is the greatest of the Free Lords of Midnight, accounted their war leader. He was but a young man when Doomdark last rose, and with the aid of many companions he repelled the Witchking's assault upon the Free lands. Now he is in middle age, head of a wavering alliance, and desperate for solution to what seems like inevitable doom.

Luxor was invited to parley with the Wise at the Tower of the Moon, on the very day of Solstice. Asked to come alone but for his dear squire Morkin, Luxor was joined on the way by Corleth the Fey, a mighty warrior he knew of old, a friend of men among the fair folk. Arriving at the Tower of the Moon, Luxor found that only one of the Wise met them: Rothron the Wise, he who called the council, the only one of the Wise to choose Man.

Rothron has spent long hours in the tower's dome of Looking-Crystal, viewing the lands of Midnight, viewing the gathering forces of Doomdark the Witchking. He has learned the star lore and knows Doomdark's designs as only another one of the Wise could. He knows of the Ice Crown, the source of the all-pervading ice-fear, and its hiding place in the Tower of Doom, in the secluded Valley of Despair. He knows how few the Free truly are.

The four of them gather now in council, and Luxor could hardly hope for a better chamber. Many things are learned from Rothron the Wise, things of destiny and design: Rothron reveals to Luxor his hidden ancestry, for he is none other but the last heir of the House of the Moon, kept secret from everyone, even the Witchking himself.

Rothron's audacious plan is revealed alongside the Moon Ring, the last of the Great War Rings of Midnight. As the Moonprince, it is Luxor's right to carry the artifact, bestowing upon him the Power of Command and Power of Vision, the dual means of leading the far-flung Free Lords in resistance to the Witchking. With the Power of Command Luxor could urge his followers to any action they would freely perform for him, bringing warmth and will to hearts frozen by the ice-fear. When tonight the Witchking releases his strength, washing the land in the paralyzing ice-fear, there could be a strength equal to it in counter, confounding him and putting his forces to disarray before even one blow has been struck.

Further revelations are bestowed by Corleth the Fey, who speaks of the parentage of the least among them: Morkin the loyal squire stands revealed as the forgotten son of Luxor himself, beget upon Aleisha the Fey after Luxor's injury and recuperation from the last war. Aleisha, knowing their love could not last, ensorcelled her belowed to forgetfulness, yet ensured that her mortal son would find his way into the house of his father.

Corleth has a reason to speak his mind now as well, for he desires the young Morkin to undertake a task that may be beyond all others: the ever-gregarious youth, thanks to his Half-Fey parentage, is completely immune to the ice-fear, even more so than Corleth himself, or the bold Luxor. Should Luxor don the Moon Ring, his location would be immediately revealed to the Witchking; should Rothron the Wise himself approach the Plains of Despair, Doomdark would sense him for what he is long before. Morkin the Half-Fey may be the only one to lead a daring expedition to steal the Ice Crown and destroy it, ending the threat of Doomdark forever.

What will Luxor the Moonprince do? Does he bend to the designs of the Wise and the Fey, or is there some other way for him and his son on this eve of the Solstice War? Will the Moon Ring secure the land against the coming night's ice-fear? The four in council may be the only flicker of hope for the Free Peoples; where will they ride tomorrow, and to what purpose? What companions, what secrets of the land of Midnight will they yet discover?

(As per the rules, you're free to promote a trait to value '3'. I suggest saving it for the appropriate moment.)

In-depth discussion of this scenario can be found at Story Games.