To be rich is to Seek

This scenario is based on the classic comics by Carl Barks, based on his characters and published by Walt Disney. The scenario is developed by Sipi Myllynen, and written by Petteri Hannila. 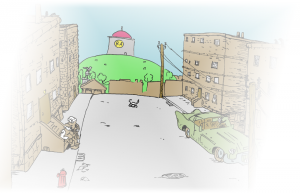 Duckburg in the middle of great changes.

It is the 70s. The Duckburg has changed from the 50s, where we saw it in the classic cartoons of Carl Barks. Unlike all the writers of comics, who kept the status quo of the Duck family, even though years and decades passed by, here we'll do differently. We take the works of Carl Barks as history of Duckburg. Something that happened fifteen years ago.

The world has changed from the 50s. Donald Duck lives his middle age, the nephews are young adults, perhaps finishing their studies. The American society has changed from what it was in the 50s.

The old heads of the Duck family have felt the touch of time as well. Elvira (Grandma) Duck has died of cancer, to the sorrow of her family. Surprisingly it was Scrooge McDuck who was shook the most. The changing world suddenly caught up with the old gazillionaire and he wasted away only few months after Grandma's death.

Yes, the world's richest duck has died, and Duckburg is facing its largest change in a long, long time.

Morte Duck is the secret offspring of Scrooge McDuck and Magica De Spell. Around thirty years ago, these two managed to set aside their differences, if just for a short while and Morte is the result of this passionate, even if only brief, union.

Magica has raised Morte in the backlands of Italy, hidden from the world. For this, he has grown to a be a solitary and sullen fellow. His moodyness is only rivalled by his pride and courage. When the news of Scrooge's death reach Italy, Magica confessed the true heritage of Morte to him. She told him of his family and position in Duckburg. They decided that it was time for him to step into the stage.

Morte has arrived to Duckburg to claim what belongs to him. Is he the final nail driven to the coffin of the family of Ducks?