Shipwrecked pirates and sailors struggle on the shores of a mysterious island. 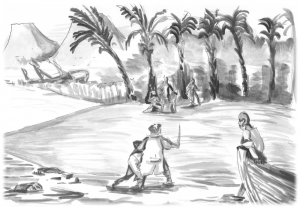 The galleon was heavily armed, yet it didn’t have the slightest chance. Three smaller pirate vessels pounded it with their merciless cannons until the Spanish captain was forced to flag for surrender.

During the lengthy ordeal of smoke and steel, a strong wind had driven the ships into a heavy mist. Events that followed are somewhat a blur, yet most of the survivors think that the ships crashed onto rocks and tipped over. True or false, only a dozen men survived and made it through the waves to the shore.

There they laid, gasping for air on a desolate beach. The silhouette of the great, fallen galleon could be seen dimly through the mist, like a reminder of the vast riches it still might bear within. Inland, their weary eyes could observe a thick jungle surrounding a dark mountaintop. Somehow looking at it filled their minds with restlessness and a primitive fear.

Five of the survivors were pirates and the rest were of the crew of the galleon. Just as they gathered their forces and made themselves ready to face each other in a final struggle, the bloodshed was halted by an eerie scream. Soon a young, half-naked woman ran towards them from the jungle, her eyes and trembling steps filled with terror.

Jean Benoit Priqué (a.k.a. The Raven) 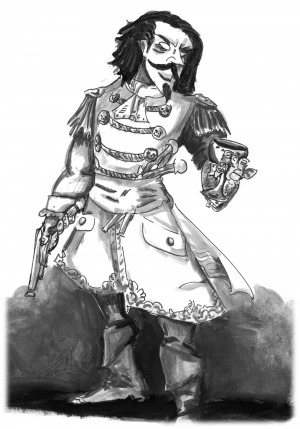 The Raven shares the name of his ship, and indeed he is the captain of the largest of the pirate vessels that found doom at the rocky shores of the island. He is short of stature and of French origins. A tailor by profession, Jean was driven to the seas at an early age and after some setbacks later became a pirate. During his short and reckless career, the Raven has struck a reputation as a fiery and unbeatable man. His modest stature has given him countless challenges and a few nasty scars, but not one of those challengers have walked out after a meeting with his pistol or blade.

The Raven lays the blame of his good fortunes to one gloomy meeting three years past. It happened when his budding captainship was about to wilt due to quarreling men and varied misfortunes. He wouldn’t have thought anything remarkable could happen in the low-class dive where he soaked his sorrows for the evening. Still, it was there where he met the fellow.

The man was old and dark-skinned as a helm made of ebony. He dismissed the young captain’s attempts to be rid of his presence, and soon he promised the captain a glorious future. But this would take place only if Raven would spill the heart’s blood in his name, the name of Meghbwhala, once for every full moon.

Raven dismissed the innuendo of this quirky meeting, but in his profession the bloodshed was easy to arrange. And so he did…and success started to follow his path, soon lifting him all the way to among the pirate legends of his time. But as the Raven’s career soared, so did his worry about this stranger who now invaded even his dreams and tainted the sweet savor of victory in his mouth. And finally, after great anguish, he managed to disobey the command of strange Meghbwhala. A month went by and another, and nothing bad happened. Soon Raven ignored the issue completely, dismissing some random thought of the stranger with a shrug.

The looting of the Spanish galleon required a joint venture of many crews. Raven led the affair, and indeed a success would be the finest hour on his career of fortune. But now his dreams lay in pieces on the shore and icy doubt crawls around in his heart.

Still, he wishes to loot the gold, preferably from the dead-stiff hands of the Spaniards. If he’d succeed, he could leave the name of Meghbwhala behind him for good.