Faith and tradition collide with the modern world in the Old West. 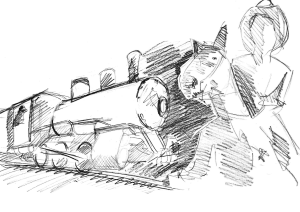 Lorado, a town in southern Texas is facing an inevitable change. The ever-expanding railway network has finally reached the remote town, bringing with it new people both good and evil. And when the reputation of Lorado as a haven of prosperity in the middle of these inhospitable deserts reaches the masses back east, the flood will grow tenfold.

Sins and temptations are the ever-present companions of men. Good folks move away, tempted by the outside world. Rails are a wide path to a greater world – or so many of them think.

The people of Lorado seek guidance and help from one man, Mickey “The White Eye” Rogers, who runs the city with a religious tenacity. Nobody knows how he managed to create this flourishing community here in the middle of nowhere, but it just seems that whenever there is a need, he has a solution and tools for it ready to go.

It was not long ago when the town had no saloon and both alcohol and gambling were banned. The effect of the railway is starting to show. A saloon was built not long ago, even though Mr. Rogers was sternly against it. The majority of the folks won’t go there, but it won’t be long until the strangers will outnumber the city folk, and they do not seem to care.

The railway near Lorado has been a dangerous place lately. The train has been robbed and the railway damaged with dynamite. The government is sending a federal marshal to investigate and resolve the issue for good.

How long can a lone man fight against the inevitable?

Mickey is a thin and pockmarked man. His eyes are so bleak that he has been called “White Eye” for as long as anyone can remember.

Mickey was a reckless gunman once, but as he has explained in countless sermons, that godless gunman met somebody whom he called The Shadow of God. That man was not forgiving, and he forced Mickey to change his ways. Soon after that Mickey arrived in Lorado and took over the town. Mickey is not a member of the clergy, but he has studied with such vigor that no one could really distinguish him from one.

Mickey helps the city folk with forced enthusiasm. He has seen what a dump the town was before he arrived, and knows that it will become one again if the threads he now controls are severed. And if he embraces his wicked side once more, The Shadow of God will be waiting for him somewhere, and from that meeting, neither his body nor his soul would ever recover.

Mickey wishes to keep things as they were. If the strangers would leave and stop messing around in the town, it could be possible. But wishes alone cannot make his dreams reality.