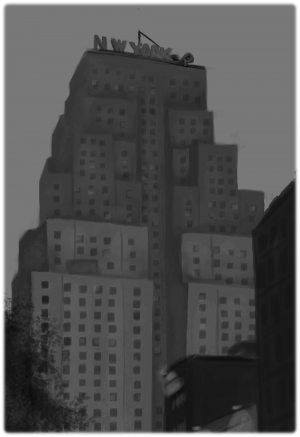 When Hotel New Yorker opened in 1930, it was one of the grandest buildings in Manhattan, its great sign shining red in the night. From gray brick, Sugarman and Berger had built a modern Aztec temple, a sentient fortress channeling the will of unknown gods. For years, the city’s glitterati gathered there to worship and pay tribute. But over time, the city grew greedy, forgetting its legacy. Pennsylvania Station, a beautiful temple of transportation and New Yorker’s lifeline, was allowed to fall into disgrace before finally being torn down, its screams echoing on Eighth Avenue. The city fell into decline.

In the year 1974, New Yorker is a relic of the glories past, artlessly fading into oblivion. The domain surrounding it has turned seedy. Everywhere one looks there is pornography, prostitution, and drugs. New Yorker has been closed for two years, time standing still in the dusty corridors. But it is not asleep. 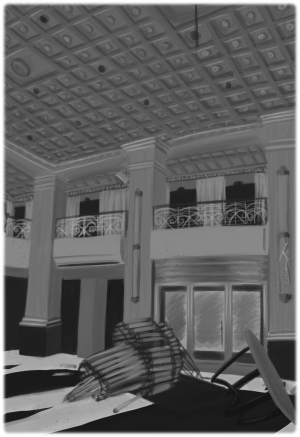 There was a time when people paid respect, when New Yorker was visited by presidents and stars, when the finest bands played in the lobby. Now they have forgotten; they think New Yorker is just a worthless hulk. They might even want to demolish it all, just as they did with Savoy-Plaza. Unless the hotel destroys them first.

When we played this one last year, the story resembled nothing so much as an American '80s horror movie like Poltergeist. We had consumerist greed (Donald Trump wanted to purchase and renovate the hotel), sharply distinctive supernatural expertise (a French occultist intent on exploiting the hotel) and ordinary Americans for the sake of audience immersion.

Playing the hotel as a character was predictably less intense dramatically than playing a human character, but we did manage to wrangle a bit of sympathy out of how the human characters exploited the hotel, and ultimately turned it into the infernal death domain that it was. When you're just a poor building that would like to be a comfortable hotel, but humans insist on turning you into a temple of blood sacrifice and corporate greed, what can you do?