The Cavalier of the Sorrowful Mien

This scenario is the work of Sipi Myllynen, and written by Eero Tuovinen. 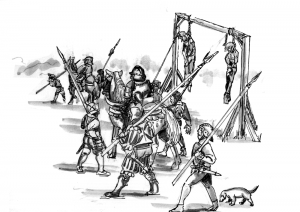 As the year 1915 ends, the Great War has settled to its natural depths: the Imperial German forces have succeeded in conquering the entire northern France, but yet the Allied French, Belgian and British armies have managed to stop the advance by way of perseverance and fox-holes. The western front has frozen in place, as the assaults from both sides are overcome by the enemy's skillful defense.

Change is in the air, though; the trench war would not last forever: German troops have responded to French provocations with a new destructive weapon, the deathly Chlorine gas. Hague conventions clearly forbid such horrible means, but the weapon proves powerful to forget as trenches are emptied by the kilometer and the stillness of the grave falls in the aftermath of a gas attack. It is merely pessimism of expectations that prevents the Germans from winning the war in Ypres in April, they are simply not prepared to advance and exploit the surprise.

Soon the Brits are producing great amounts of their own Chlorine, however, and the French bring in Phosgene, a true chemical weapon, invisible and slow to kill. Both sides hasten to develop even more horrible produce.

The routine of trench war consists of waiting, punctuated by artillery strikes. It gnaws on the nerves. Strange stories are told, macabre characters take on a life of their own. Strange noises in the night sky come from the traitor's plane, a British airplane flown in pitch darkness beyond the enemy lines, as if the Flying Man could see in the dark. Entire bunkers of soldiers are discovered on the occasional morn, asphyxiated in their beds by a Horror slipping past all guards, a female spectre wilfull of murder.

Demons traverse the earth here, demanding ever more of the soldier. The time and the place, humanity itself twist and bend as the trench war turns into an ever more lifeless, changeless sphere, a hurtful little bundle of static existence. Only the rare and the strange, the boldest are capable of moving and acting in this tableau. 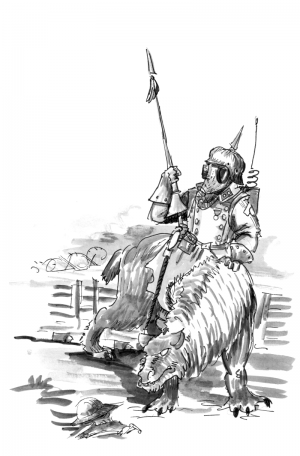 When the raja of Jaswan, Raghunath Singh, died in the year of our Lord 1897, the princedom was incorporated under the British colonial government in the Bengal Presidency. The only male heir of raja Singh, Lakshman, had disappeared earlier, leaving the principality without a colonially approved inheritor. This was the habit of the time, the British governor Elgin rarely passed on an opportunity to end an independent principality deep in the back country of the Empire.

At the same time, deep in the jungles of Bengal, childhood ended for one casteless orphan boy. His adopted parent was a bear mother, one he called with the simple shout of “Graur”; she died of a bullet shot. A young, bold pilot had made an emergency landing in the jungle and provoked Graur in his thoughtlessness. The orphan boy would never come to forget this “Flying Man” who robbed him and his bear brother of their mother.

Kodak was the best brother a boy twice orphaned could hope for. They did everything together. Kodak was the gentlest of partners, allowing the boy to ride him and pick fruit together. It was only the greatest of distress that would bring Kodak's temper to the fore - those were the Kodak moments, the ones that were never discussed afterwards when the boy and the bear brooded upon their future under the jungle moon.

However, all this happened long ago and far from here. Now, in the trenches of Artois and Somme, there is only war, and war discovers the “Gas Phantom”, a mysterious figure spotted on this side of the battle or that, at any point of the front. He is a mythical character, a ghost that rides on a huge wild beast, features obscured by a gas mask of Bohemian make, wielding a spear and a radio, with us and against us.

It is said that the Gas Phantom despises war, and chemical warfare. He's been said to have destroyed British gas depots at Loos, and helped wounded soldiers in Ypress. Both sides of the war have officers who consider him a friend, and soldiers who owe him their lives; he makes his home in the no-man's land. Nevertheless, nobody seems to know what he desires; might be he knows not himself, could be he does not even have a choice, maybe he is as much a prisoner of this frozen frame as we are all and one.