A light-hearted farce set in 1970s Naples, starring a certain plumber from Brooklyn.

The 1970s were a chaotic time for Italy: during the so-called “years of lead” the country was tested by both right-wing and left-wing terrorists. Leftist red brigades wanted to detach the country from NATO, while “New Order” and other similar fascist organizations opposed the communists and strived to re-legalize the Fascist party in the national politics. All extremist organizations used assassination and terror tactics to further their goals.

A third, quintessentially Italian terror organization was organized crime: Camorra, 'Ndrangheta, Sacra Corona Unita and Cosa Nostra continue their timeless game all over the Italian boot. Compared to the sleepy bourgeoisie of northern Europe and their dry, cold war, Italians in their own inimitable style mixed politics, enterpreneurship and even religion into the sort of a pasta plate where you'd need one of those novelty spaghetti forks to untangle!

Naples, the ancient capital of the “Two Sicilies”, it is the third-greatest city of the peninsula. A veritable stomping grounds for fans of the football club S.S.C. Napoli, a milking cow for the gangsters of Camorra, one of the most ancient cities of the world - birthing grounds of the guitar and the pizza, home town of Sophia Loren. Ah, bella Napoli, come ti amo! Bellezza strada, grazia donne, gusto della cibo! <fall out of the chair, temporarily overcome>

Mario Mario, a hero of justice 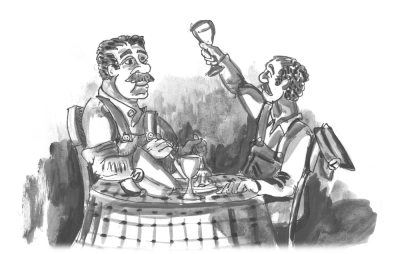 Mario Mario, and his brother Luigi Mario, are American-Italian plumbers hailing from Brooklyn in New York City. Having been entangled in mob affairs, the bold duo refused to stay silent about injustice. After being star witnesses in a large mob trial, the brothers escaped into a witness protection program, forsaking their family name for the sake of security.

Now Mario and Luigi have arrived in the old country, in beauteous Naples, the storied homeland of their grandmother's, intending to start a new life in Italy. The cold, black hand of the Mafia would surely never reach the Mario brothers in this distant land… Yes, Mario is indeed oblivious to the origins of the American mobster, as well as of the Italian language (unlike his brother Luigi, one should note). This, despite his thick accent resembling a speech impediment more than anything else.

One worries for nothing, however, as the Mario brothers are hard workers and skilled plumbers in a country that has only recently come to enjoy the luxury of running water. The “Super Mario Bros.” plumbing company has nowhere to go but up in Naples!

To tell the truth, in his heart of hearts our irrepressible hero is a tragic character; his choice of standing against the Mafia has cost him the love of his life: Pauline, the girl next door back home (and the heroine of “Donkey Kong”, in case the extended pop culture reference is becoming too obscure to follow) was lost to Mario for ever as the brothers disappeared from civil society. Despite all this Mario, the eternal optimist, still manages to muster a happy shout and a smile every morning.

We engaged in some in-depth discussion of the scenario and related issues at Story Games.