This scenario was inspired by Spider-Man 2099 comics.

This is the pure form of servitude: to exist as an instrument.
-Herbert Marcuse

A superhero scenario with a hint of cyberpunk. 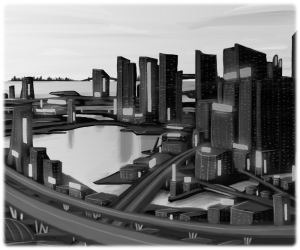 The city of Darwin Bay is two hundred square miles of glass, steel and concrete, built on an island on Pacific Ocean, fifty miles west from San Francisco. It’s a haven and a playground for hungry tech companies, whose gargantuous office towers cast their shadow over the rectangular grid of streets. The city core is for business and entertainment, while the edges are a maze of sprawling factory complexes and port infrastructure. Five million people live in this 24-hour city, from slick corporates, faux-bohemian creatives and billion dollar whiz kids to faceless staffers, gruff robot pilots and the tunnel-dwelling homeless.

Darwin Bay was founded in 1955 by aeroplane magnate Konrad Frei as the factory city of his dreams. Using his political connections, Frei secured Darwin Bay a special status as an independent legal entity. The island became a test lab and a showcase for unhinged capitalism and the limitless possibilities of technology. Over the decades, corporations flocked to Darwin Bay and brought their workforce with them, creating a true metropolis.

Today, the city is run by Tony Zeck; he is the Frei Industries CEO and the City Manager selected by Darwin Bay Board of Directors. Zeck is known around the world as the father of Frei Glider, a luxurious personal aircraft only allowed in Darwin Bay. Zeck is also known for his no-holds-barred approach: when Frei Industries fired him five years ago, he hijacked the company. Now Zeck has given the ever-present Darwin Bay Security Services (DBSS) a carte blanche in dealing with the growing homeless problem, perceived as a security threat by investors. When the DBSS goons don’t have the firepower or expertise to do a job properly, Zeck turns to Frei Special Security Section, aka. Skunkworks, a high-tech team of assassins. He will do whatever it takes to make the city business-friendly again. 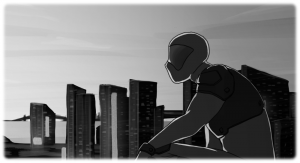 A hero has stood up to resist the strong-arm tactics of the corporations. He calls himself Pushback, and he hides his identity behind a sleek orange-and-black body armor. Pushback uses Taekwondo-influenced combat style to beat up DBSS thugs whenever they try to harass homeless or break up demonstrations. To move rapidly in the city Pushback uses powerful repulsors attached to his legs. These repulsors allow Pushback to make superhuman leaps, an ability he also uses to strike his enemies with great force. Pushback’s tireless fight against the system has made him a countercultural icon, which is why Zeck is willing to use more and more resources to catch the hero and make an example out of him.

The man behind the orange mask is Julius Kang, a Korean-American engineer working for Frei Tactical Systems. Julius was a child of parents living in extreme poverty. Realizing they couldn’t give Julius a decent shot in life, they gave him up for Frei Nurture + Education Program (FREINEP), where Julius was brought up. However, Julius has grown to despise Frei, as the corporation always saw him an asset rather than a person. After witnessing corporations trample human rights too many times, Julius decided to take action and used his engineering expertise and lab equipment to create a perfect body armor for street fighting. When previously Julius has vented his rage in combat sports, now he is crushing noses and kneecaps on the street, in the name of justice.

Julius’ boyfriend Newton is his confidant and the only one who knows his secret identity. Newton wants Julius to stop, but he can’t do it, despite the risks. The street is calling him.