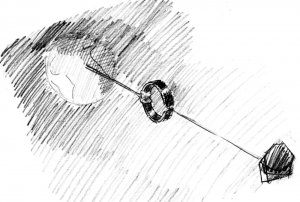 Construction of the space elevator “Yggdrasil” was completed in the year 2169, in time for the bicentennial celebration of Man's first moon flight. As the largest and quickest space elevator to date, and the first one fit for human use, Yggdrasil ushered in a second golden age of space exploration. The deployment of solar energy on massive scale has, for the first time, lowered the marginal costs of orbital deployment close to zero, leaving sheer capacity of the elevator as the only meaningful limitation for humankind attempting to leave the gravity well of Earth.

A space elevator like Yggdrasil gets away from the necessity of the constant expensive and destructive rocket launches of the 21st century by the simple expedient of climbing: the great climber trains, “cable-horses” of Yggdrasil, pull payloads up into space, powered by solar panels in geostationary orbit. This is made possible by the great layered graphite cable of the space elevator, extending 80,000 kilometers from the surface of the Earth; the cable is anchored down in the Gulf of Guinea by the floating anchor ship “Mimi” and drawn taut by the weight of a counterweight station – initially a mere asteroid hooked at the end of the cable – far beyond the geostationary orbit, where the centrifugal force constantly tries to fling the counterweight away into space. The arrangement makes it possible for the cable-horses to gain height, even interplanetary heights, by simple mechanical drag on the cable, without any kind of chemical propulsion. The journey into space is long, but it is no longer necessary to jaunt it in one expensive burst; there's even a tourist trap restaurant hanging on the cable at 20 kilometers for those who don't have time to climb into space proper.

Twenty years after establishment, the counterweight asteroid of Yggdrasil has found its natural function: the International Vocational School of Space Technology, or simply the “Astronaut School,” has set up shop in this exotic setting, encouraged by the constant artificial gravity provided by the centrifugal force. As the school headmaster Johan Drees envisioned early on, the explosive growth of the space industries in this second golden age has left the lack of a trained workforce the only meaningful bottleneck of expansion. A large institution of learning in orbital space has proved the most efficient solution for a world that requires thousands and tens of thousands of orbital workers, astronauts and colonial crewmen to fill posts on space stations, Lunar and Martian colonies, and asteroid-herding crews.

In the year 2189, Astronaut School Yggdrasil is the most desired vocational high school of the free world. Every year, the school takes in 500 of the most talented applicants, boys and girls under 20 years of age, with finished primary education. The students will spend the next three years far from home, ten thousand kilometers above the Earth; as the mere journey to the school at the far end of the space elevator takes a week, the students will learn to live in a space habitat out of necessity. After finishing school, the new astronauts will have their choice of employers in the space industries, or they may continue on to advanced education at just about any college, or even the ETO space corps Lunar Academy.

The second space age brings a cultural paradigm shift to an Earth in the grip of nation-states and resource scarcity, a change not embraced by everybody. Headmaster Drees has had to prove himself every step of the way to a board of directors consisting of functionaries from the major funding policies of the International Space Agency, such as India and the European Union. This is not always easy, as the school continues to raise a new generation of astronauts in the spirit of unflinching liberal globalism.

Sania is a smart 16-year-old Indian girl who just got her acceptance letter to the astronaut school. Unlike the 500 other lucky entrants, she's not so excited about space research or industry; rather, Sania is driven by the desire to fall in love with the sweetest, most talented, heroic astronaut boy ever, and to win his heart for her own. All things considered, the astronaut school is the place to be for her!

It's not that Sania hates space, she's merely lukewarm to it; star-gazing never was to her taste, and planetariums favored by her school-friends caused no heart palpations. On the other hand, Sania's first crush was the bold captain Johan Drees, a brave asteroid shepherd worshipped by the whole world a near decade back. Above all, however, the astronaut school is so very prestigious that it is an acceptable ambition for even a girl of the family, at least as long as you succeed.

Sania does not know yet what her dream man is like, but it is evident that a new life in a thoroughly new environment will shake her sensibilities. There will be new challenges to the smartest girl in her school; new freedoms unknown in a conservative family environment; new experiences that will make her view herself in a new light. The only certainty is that Sania will strive hard to fulfill all of her dreams!