Agents, conspiracies and the paranormal clash with family life in the suburbs. 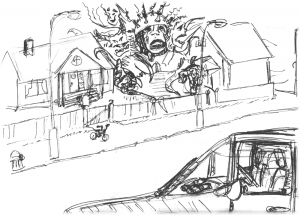 From his birth, Alex Munro has been an extraordinary kid. Being mildly autistic, he has had his fair share of difficulties in adapting to life around other people. It is no surprise that he has spent most of his time reading books and wandering in imaginary worlds of his own creation. Going to school didn’t ease things, but despite the bullying and other hardships, he has gone through three successful semesters.

Until this summer, that is. Nobody knew what happened, but suddenly his condition started to deteriorate. As time went by, he closed up more day after day. Finally, only his mother could communicate with him. He kept mumbling of “a great darkness that is coming” over and over again.

It started with earthquakes. Seismologists and other scientists were bewildered: how could such events happen in these parts? It seems that the center of these bizarre incidents is located in a quiet suburb. FBI took over the investigation, as there was a fear that someone had developed a new weapon that was being used on US soil. 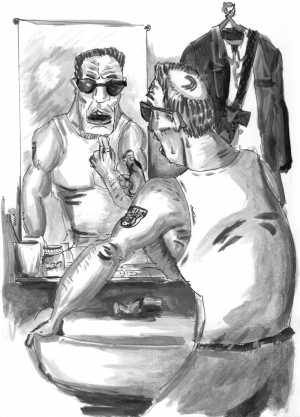 Obadiah Smith is in a man nearing his fifties, laconic and tired of this world. He had a strict, religious upbringing; winning his independence had been a traumatic ordeal in his youth. Later his attempts to create a normal, social life for himself failed over and again. Only his work has given him any rewards.

Obadiah has replaced the faith in his life with extreme patriotism. The level of his devotion borders on insanity, but he has nevertheless managed to keep his job so far. A couple of recent cases have pushed him near the edge though, and already his every move is being watched closely – if required, they can take him out fairly quickly. The sad thing is, when he is not going overboard, Obadiah is a great agent. This is no surprise, as he puts every fiber of his being into his work.

About a year ago, as a part of a difficult case, Obadiah ended up hooked to a specially designed drug called Crytaxa. Under the influence of the substance, he doesn’t need to sleep more than few hours a night, but obtaining it requires contact with some fairly shady individuals. Obadiah is theorizing that Crytaxa was created by a shadow operation under the US government, to boost the performance of soldiers. It is a good theory, even though he doesn’t have a shred of proof to back it up.

In addition to sleep deprivation, Crytaxa seems to help Obadiah in keeping the memories of his turbulent past and social anxiety in check. Unfortunately, he seems to have the need to up the dosage of the stuff once in a while.

Currently, Obadiah is investigating the weirdly localized earthquakes. He has put the house he thinks to be in the center of the phenomena under tight surveillance, and pores over the data day and night. Other agents consider him mad, as he claims that the boy living in the house is responsible for the ordeal.

Obadiah would show everyone that he is right – and complete the mission no matter the cost. Perhaps the boy is a new superweapon generated by the Russians, or a spy with paranormal abilities. Perhaps he could harness the boy’s abilities to aid the US in its struggles against foreign powers. He just needs to get the boy under government control as soon as possible.